The Pink Pinecones Continue To UnFurl

First, I just had to add this upright fuchsia to my collection this morning. Isn't that black purple just incredible!? It's name is Rohees New Millenium. Rohees are famous hybridizers, in Europe I believe. They love fuchsias over there! I almost never, ever buy new varieties larger than the little 2" starts. I had to think about this one for a while. Even went home and came back four hours later! 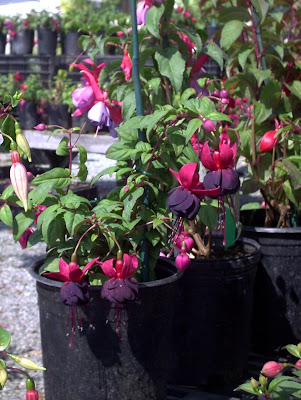 This is one of the stock Justicia's hanging out in the full sun almost all day long! The hummingbirds just love them. 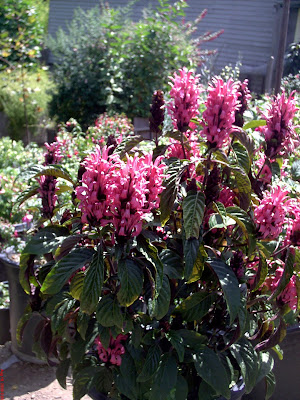 And here is the big guy, still unfolding. You can see some color up near the roof now. Believe it or not, if I dead head it, this will still be blooming in January. Todays task is to chop up some of the poor stock plants currently blooming......but it must be done if I am going to make more them. At least this one doesn't need to be cut anymore! 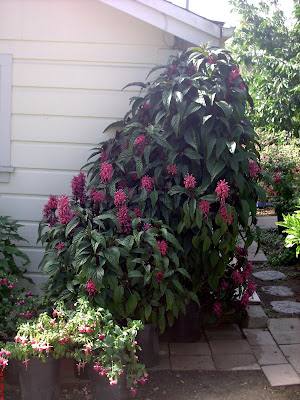 Posted by PedricksCorner at 5:07 PM No comments:

Now you see it, now you don't. You can still see a bit of the Plumbago above the fence next to the Oak tree Ross Diaz planted. He never once complained about the Plumbago, nor did he provide any kind of warning. Just drove up his truck and cut it all down and then drove away.
Pedricks Corner needs to relocate! Nothing is safe here.
His fence in front of his house is covered completely and entirely with various plants...... 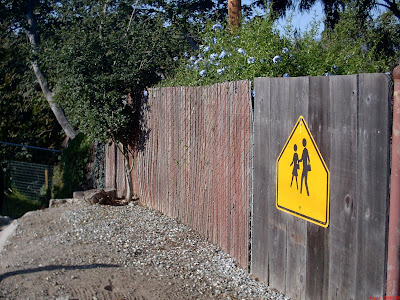 Posted by PedricksCorner at 6:28 PM No comments:

And this morning I took this photo. It is like a present being ever so slowly unwrapped! 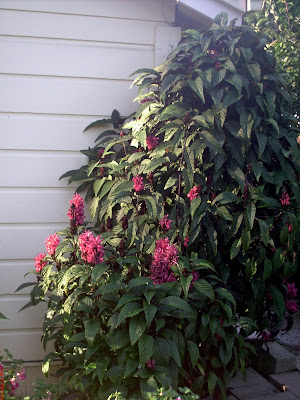 This is my beautiful Plumbago stock plant. Everyone who drives by and sees it, just loves it. It is a bit blurry, but it would be impossible to retake the photo now. 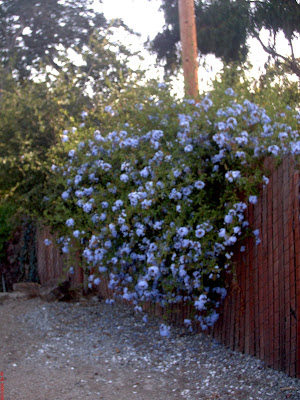 This is it on the inside of the fence. And it is all that is left. Because this morning my landlord destroyed everything you saw in the photo above. Just because he knows he can. Someone made him angry so he came down the street and just hacked it all down......
Yes, I am looking for another place. My stock plants are not safe here. When he isn't hacking away, he is spraying herbicide on everything he doesn't recognize. Needless to say, his knowledge is limited. Even sage and thyme aren't safe here. No, he doesn't want me to point out what is not a weed! 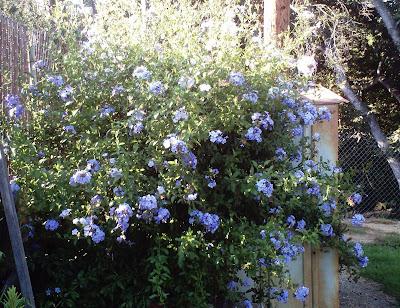 Posted by PedricksCorner at 3:21 PM No comments:

Okay, first you might ask, why in the world has it been SO long since I posted here! Well, I am trying to build a business from scratch with no capital, remember? And part of that is increasing my inventory and future inventory. I now have 110 varieties of upright fuchsias.
Another big part of that is redirecting the puplics preconcieved ideas about fuchsias as something in a hanging basket that fries in the heat and then freezes to death in the winter!
Which requires allot of time in forums talking about fuchsias.
Another part is to feed the database at DavesGarden.com with original photos of the varieties of upright fuchsias I am growing that are not yet in their database. And adding photos of my fuchsias even when they do already have it listed.

Today's post though, is about one of the original plants I went in search of years ago to be one of the main plants I wanted Pedricks Corner to be a source for. It took a long time, as the internet was not that user friendly back then and informational websites like DavesGarden.com did not yet exist. Or were just getting started.

I found a twig of a Braziliann Plume Flower - Justicia carnea 'Huntington' in a pot full of weeds in a little nursery going out of business up in northern California.
I have propigated it over and over and created lots of stock plants from which I can produce all the cuttings I need now.
The first photo is of one I gave to a friend last year and has a close up of the flowers. 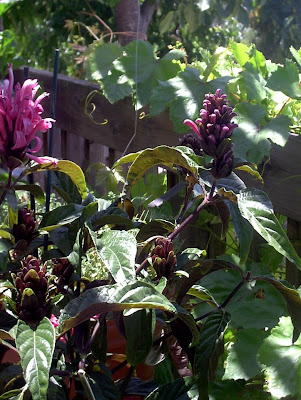 Aren't they beautiful? And hummingbirds love them!
Back in the years I worked for a large commercial nursery, we grew these as houseplants. I had no idea they could be grown outdoors. But the only space inside the house for plants is occupied by dendrobiums and cane begonias....
These guys turned out to be strong though, and have survived freezes that killed many other perennials I thought were made of tougher stuff!
They even bloom in December and January here.
The picture below is of one of my current stock plants in bloom.
But wait until you see the photo below this one!!!!! 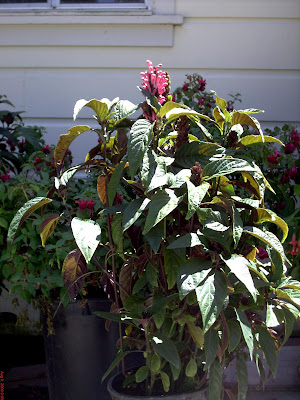 This is the Papa stock plant below!
I had absolutely no idea they were capable of getting this big! I finally had enough stock plants that I haven't needed to cut him since Febuary and now look at him go!
That is a 15 gallon black pot he is in!
And he is not only covered with what one person described as "purple pine cones," they are all starting to show the pink buds.
I am just stunned.....
I can't wait to see it everymorning and take another photo of it as it starts to bloom.
Check back in soon to see it covered with pink!!!!
The hummingbirds have been working over time to secure their territory from others coming by to check this out ;-) 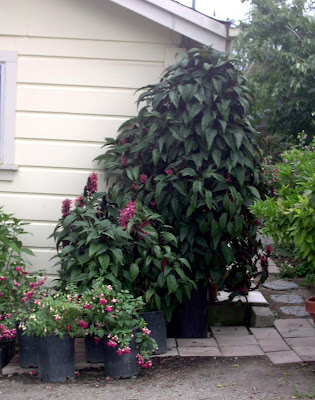 Posted by PedricksCorner at 7:18 PM No comments: