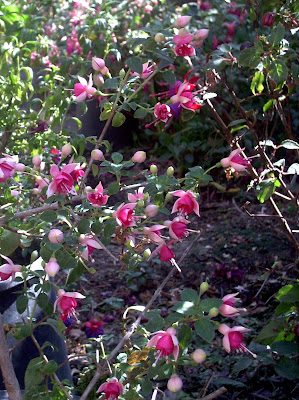 'Northway' is one of the smaller upright fuchsias I hope will become popular. It has such cheary colors. This photo doesn't do it justice. There was a run in with a gopher which almost killed it and it is now recovering nicely in a container. As soon as it begins to bloom like this again, I'll take a better photo. Like 'Delta's Parade' this one is a trouper which can bloom year round in some zones like this one, zone 9b. Even when we have freezes and hail, these two don't skip a beat. And like 'Marin Glow' and 'Black Prince', it stays relatively small and compact. A nice contrast to the taller ones.
Posted by PedricksCorner at 12:05 PM No comments: 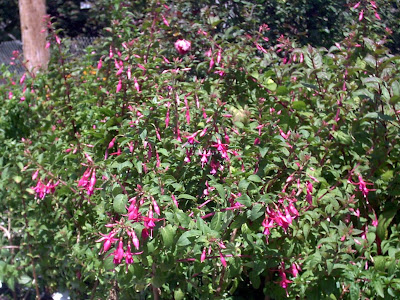 'Mrs. J. D. Fredricks' is one of the first varieties I went in search of when I began my collection. This one can get allot taller than the information out there will lead you to believe. It can get much taller than just three feet over the years as it developes a trunk. My original was broken and doesn't reflect how big it ought to have gotten by now. But it is recovering very well and this photo is of a group of one gallons I've planted from the cuttings I made a year ago. They are already two feet tall. I also cut a bunch of these branches and made a floral arrangement of them to post in the fuchsia forum at DavesGarden.com As fuchsias make great and long lasting additions to floral arrangements!
Posted by PedricksCorner at 6:29 PM No comments: 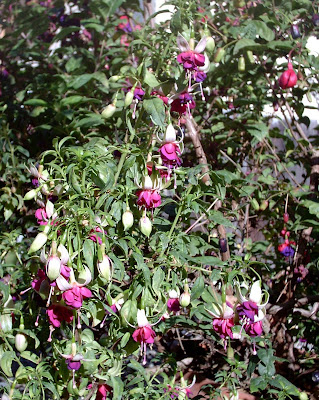 'Mood Indigo' is just blowing my socks off this spring! I am waiting to take a new photo of it as a bush until it begins to bloom again. In the meanwhile, let me tell you, it is putting out new shoots as big around as my thumb! It is headed for the sky in a big way! I had no idea it could do that. This one was a bush in my yard for a couple of years and never really did much. But in it's defense, I must mention that my entire yard is hard pan clay. In the summer when it dries out after the winter, a pix-axe will just bounce off of it. So over the years, while it is still workable after a winter of soaking rains, I have worked hundreds of bags of steer manure into it. And I have built up beds using concrete building cinder blocks as walls. I plant herbs and strawberries in the holes! The original 'Mood Indigo' was in a relaively shallow area. The ground had not been worked down very far and then a gopher ate out the entire root system one spring. I thought I had lost it entirely. Except that I had made a few cuttings.... And now, just two years later, I have several which are much larger than the original. I love the colors on this fower and I can't wait to show you what it looks like in full bloom later on.
Posted by PedricksCorner at 9:17 AM No comments: 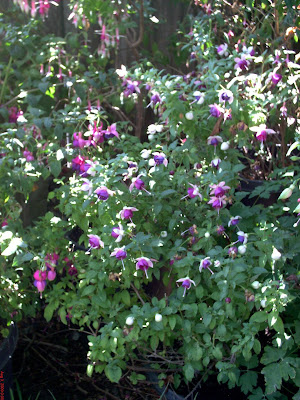 'Marin Glow' makes a nice compact sturdy bush about two feet high or so. Another nice one to mix up the heights in a collection. Some of the smaller varieties can be a bit "lax" in the strength of their short branches, but not 'Marin Glow.' It has a definite upward growth pattern and is one of my favorites in the front yard.
Posted by PedricksCorner at 1:40 PM No comments: