I know it has been almost five years now since I have been able to offer fuchsia starts for sale.  It has been a rocky road ever since I moved the nursery and it froze and then the deer ate everything that tried to come up.
This fall, right when I was finished making the lavender wands which have been getting me through the winters, I fell twice and hurt my tail bone so badly that I could barely walk.  And since it was necessary to work anyways, I just didn't have anything left over in me to be able to also make cuttings.  The next thing I knew, it was too cold to make cuttings.  Since I do not use a heated greenhouse, it is vital that cuttings be made when the weather is warm enough for them to grow.
I never used heated greenhouses because the whole point of growing upright fuchsia varieties and species, was to grow vigorous and strong starts that will not go into shock when they are planted out in the elements.
I haven't even made any attempts to cover any of the fuchsias to protect them from freezing, so I haven't even been looking at them much.  I didn't want to see damage from not having the time to protect them.
Etsy has become a world wide flea market and I have only sold half of my lavender wand inventory instead of running out before the end of the year.  They have not only included everything from everywhere, they have disabled our abilities to help each other be noticed.  And since few people even know lavender wands exist, let alone search for them, I was very dependent on the various ways we who have Etsy stores used to feature each other.
So I have been spending every waking moment trying to sell lavender!
This Christmas, I happened to look up at the Fuchsia boliviana growing next to my front door and was shocked to see it blooming!!  This bush is almost 8 feet tall right now and I was expecting to look up and see frost damage, not flowers!
Bottom line is, even if I have lost many of my original stock plants, I am going to at least try to get species starts going as soon as the weather and working to make ends meet allows.  I have also decided that since so many of the cultivars I was trying to save from being lost, the heirloom varieties, may now be impossible to find, I am going to finally try my hand at hybridizing with what I have.  That should be very exciting!  My goal will be big, strong, fast growing, upright bushes!
Even if you are not interested in purchasing lavender items, you can help make a difference by visiting the new ArtistsOfAmerica website and increasing traffic to it by sharing.  Selling the lavender is vital to being able to start fuchsias again this coming February in order to have new starts available by April.
Thanks!! 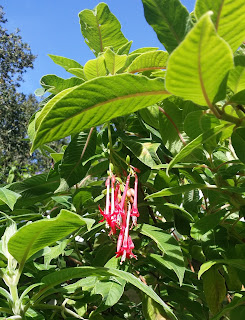 Posted by PedricksCorner at 2:56 PM No comments: