The website is finally up and running! It isn't finished yet, but by the end of this week-end, I hope to have all of the inventory entered and all of the PayPal buttons in place. As well as a shopping cart.
I have put it at the top of my list of favorite websites here, ha, ha!
I confess to being very, very concerned that learning how to do this in time was going to be beyond my abilities. I owe allot to many people who gave me good advice along the way.

And I think I would really enjoy continuing my education in web design!! It's fun!!
This one was designed on-line via OfficeLive. Another one, which will replace it, is being designed in Dreamweaver. That is the program I am really trying to learn.

I also need to thank my friend Robert Cruz for all of his stunning photographs. Plus my sister Phoebe and her husband Dave, for their photos. What would a plant nursery website be without photos!!?? All of the old photos of mine there, will be replaced in the future with better one. For now though, I felt something was better than nothing.

So I hope that you all will take a moment to visit the site. And once it is finished, I am also hoping you all will e-mail a link to it, to all of your friends and family. And ask them to send it on. The more it gets spread around, the more likely it is to be seen by future customers out there.
Meanwhile, please bear in mind that it is not finished ;-) when you write me with your suggestions.

Have a great day! CatSmiling
Posted by PedricksCorner at 2:12 PM No comments:

It has been a very busy two weeks since I last wrote here. Of course, last Sunday was Mothers Day. These holidays ya know!?
Meanwhile, as I learn how to build websites, I also bought 10 more varieties of upright fuchsia's, bringing my total to 60. One of these days it is going to be at least 100!!
Here below, is a photo from way back when I was first really trying to add to my collection. These are all the little future stock plants getting ready to be tucked in for the winter in 2007. Their big bro's ( the original collection) are in the ground in the back yard at this time. 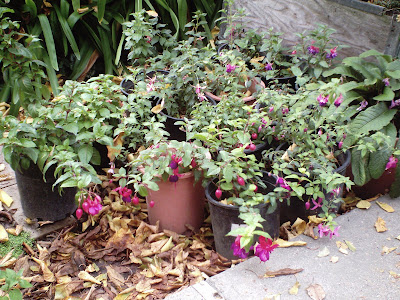 And here is a photo from today! As you can see, they have grown a bit! And this is after they have been cut repeatedly for propigation! You can't see them all because now it would be impossible to get them all into one photo. So as soon as a fair number of the collection are all in bloom at the same time, I promise to shoot a little video tour.
We had a bit of a heat wave here. Plus, the sun is now rising and setting so much farther north, that the area where I used to keep the new cuttings in the shade, was no longer in the shade! Yicks! Not only were they getting a bit of rising sun, by about 2pm. they were in full sun again. Even with the misting system, the new cuttings just cannot endure that!
So yesterday and today was a frantic race to build another area to keep them in, and move the misting system. Everyone made the transition okay! Some wilted in the heat while they waited on me, but they perked back up again after a while in the cool shade and on the cool mud floor of their new digs ;-) 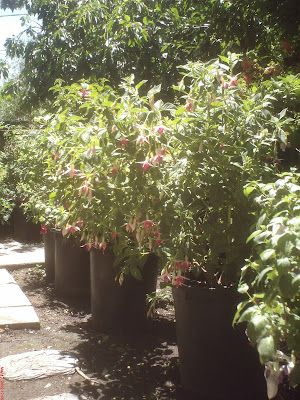 This is just a photo of what I think is kinda cool. I haven't propigated this fuchsia yet. Because I can't bring myself to cut it down out of the cherry trees it has grown up into! I still don't take the best photos. I wish you could see how it looks like a dream of ruby red gum drops covered with icing, dripping down all over under the cherries.
Now, I've got to get back to work on that website! It ain't easy ;-)
But it is fun! 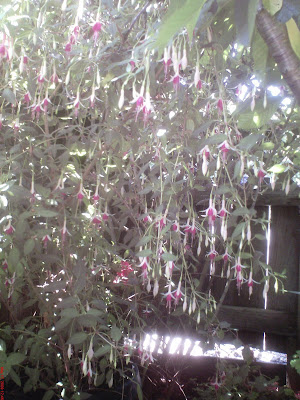 Posted by PedricksCorner at 9:19 PM No comments:

Where was I last weekend? Well, a friend came by and took so many stunning photos of the stock plants in bloom, that I spent hours and hours looking at all of them over and over again!
Not all of the varieties were in bloom, as I have been busy making cuttings from them ;-)
But he has given me allot to work with for the website!
Here are two samples of what is to come. This fellow below is one of my all time favorites, Vinegar Jo. I have always loved the small and simple flowers the best. 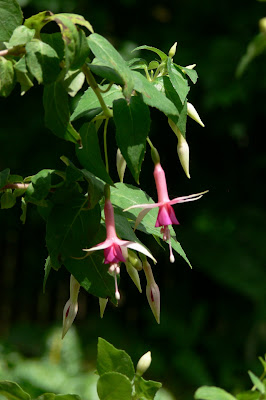 The is a shot of my ground cover, Isotoma or Star Creeper. I just love these cute and tiny little blue flowers carpeting the ground. I hope to have it covering all of the ground around the base of all of the stock plants. I hope he doesn't mind me posting two of his photos before he's had a chance to edit them. I was just so happy he took this shot. And that little touch of sunlight makes it an award winner in my book! 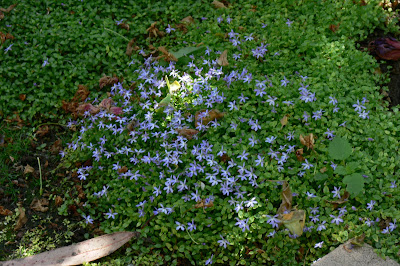 Posted by PedricksCorner at 10:40 PM 2 comments: