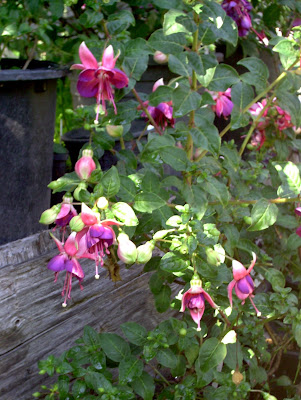 Normally, I don't like marbled coloration in plants and in particular, flowers. But 'Amigo' is an exception. And I like how flared the corolla becomes once the blossom is fully open. I will try to get a better shot of it this year. It's blooming right now, but most of my collection is still growing out of the damage from freezing and two hail storms. They look great! Just a bit singed on the ends of their leaves and a bit tattered from the hail. Everything was fed yesterday and now they will really take off!
Posted by PedricksCorner at 9:07 AM No comments: 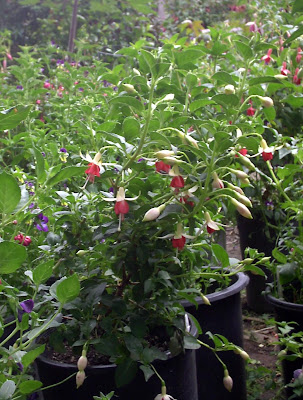 If you've been following my posts, then you know I like the simple blossoms the best. This is not one of my better photos, but 'Anita' is one of my favorites and I am really looking forward to seeing how big this one can get this year. It will be it's first spring in a 15 gallon container.
Posted by PedricksCorner at 10:08 AM No comments: 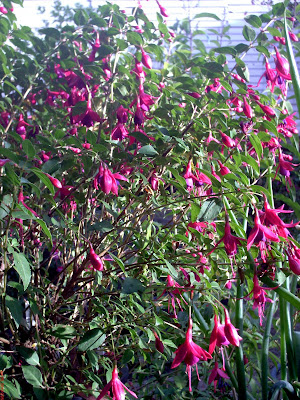 This little bush is a blaze of color most of the year. Like 'Black Prince' and 'Lord Byron', it is a compact bush with lots and lots of flowers. In the ground with good deep soil, it can also handle the sun and heat. This winter we had much colder than normal weather, even two hail storms, and 'Blue Flame' did just fine!
Posted by PedricksCorner at 9:51 AM No comments: 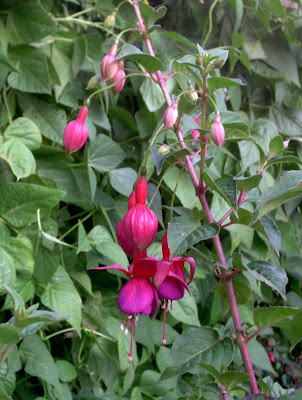 'The Aztec' is a puzzle.... There is a trailing type fuchsia named 'The Aztec' which was introduced by Jones W in 1961. This is definitely not a trailer! This guy is going straight up and fast. There is another 'Aztec' introduced by Evans & Reeves in 1937, but there is no photo. And there is no 'Aztec' or 'The Aztec' registered with the American Fuchsia Society. So I believe I am going to have to assume this fuchsia was mislabeled when I bought it, and is indeed the 'Aztec' of Evans & Reeves. If you have more information regarding this fuchsia, please let me know.
Posted by PedricksCorner at 9:20 AM No comments: 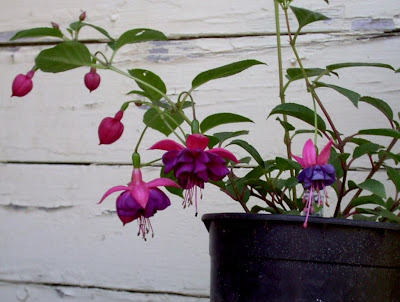 'Cherry Soda' is one I am really looking forward to seeing become a large bush. The flowers are not huge doubles like some, so I am expecting they will be more abundant. More like 'Dollar Princess' and 'Gordon's China Rose' than 'Convention 2004' or 'Quasar.' Don't you just love how the flowers change colors as they mature!?
Posted by PedricksCorner at 2:27 PM No comments: 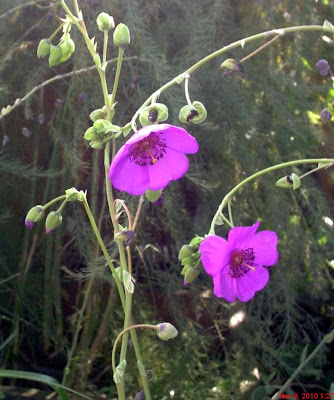 This photo doesn't do the color of these flowers justice. As with most succulents, the true colors are like neon lights. These are something you'd want to plant in the sunniest part of your yard, as they can get a bit leggy if they are in partial shade. And like other succulents, the flowers will only open in the full sun. If you want them to spread out fast, don't treat them like a cactus. Water and fertilize regularly and they will reward you.
Posted by PedricksCorner at 5:34 PM No comments:

Email ThisBlogThis!Share to TwitterShare to FacebookShare to Pinterest
Labels: My Other Favorites 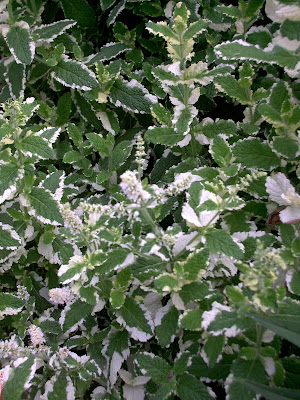 Everyone who has placed an order knows, they get a colorful little bag of dried herbs in with their invoice. It might be filled with lavender, lemon verbena, lemon balm, or any one of four different mints. All of which I grow and dry myself. The mint in this photo is one of my favorites. Both for it's beautiful foliage and it's wonderful fruity scent. It is well named, 'Pineapple Mint' or Mentha sauveolens.
Posted by PedricksCorner at 2:48 PM No comments: 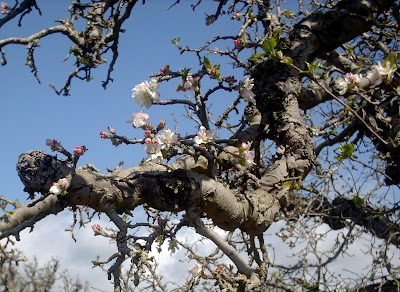 I get to drive by acres of apple trees every day on my way into town and they are all in bloom right now. These really old ones have been calling me to stop and take a photo for years now. I finally did on a day when I was also fortunate enough to be able to talk to the owner. These wonderful old trees are "Yellow Pearmains" and no longer planted commercially. But there are nurseries out there specializing in providing young trees of many "antique" or "vintage" cultivars. So hopefuly these will continue on.
Posted by PedricksCorner at 9:30 AM No comments: 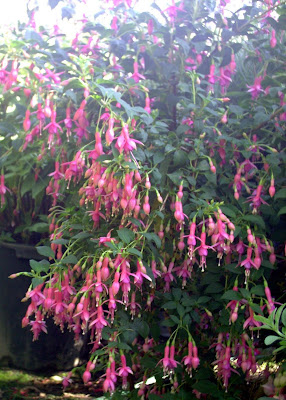 Did you know hummingbirds tend to like the smaller flowered uprights more than the big doubled flowered cultivars? They seem to have more nectar. The flowers are usually more abundant. And I think the nectar is just easier to get to on the smaller non-double blossoms. This here is 'Margery Blake' and she's definately one of my hummingbirds favorites. I've been told that is also has to do with how much closer these cultivars are to the original species, and that hummingbirds seem to prefer species over the hybridized cultivars.
Posted by PedricksCorner at 3:09 PM No comments: 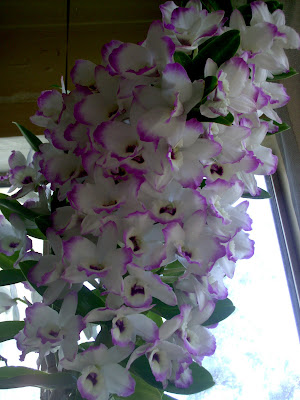 There is a reason why this type of orchid is called a 'Noble' dendrobium! This guy has been blooming since before Valentines Day. In fact, by Valentines Day, it was almost in full bloom. If you look close, some of the older flowers are beginning to fade. They begin to get a paper thin look to them.
Yes, production of this guy is on the table for the future! By next spring.
Posted by PedricksCorner at 2:43 PM No comments:

Email ThisBlogThis!Share to TwitterShare to FacebookShare to Pinterest
Labels: General 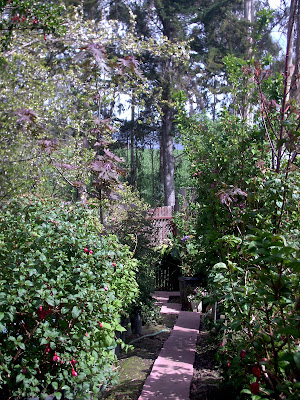 This is the road I must take to work :-D
Just took this pic yesterday morning before a hail storm last night. But nothing was damaged, whew! Down below is the potting bench room where lots of little starts reside. I was very worried the winds would take the roof off, but it did not!
Posted by PedricksCorner at 2:04 PM No comments:

Email ThisBlogThis!Share to TwitterShare to FacebookShare to Pinterest
Labels: General 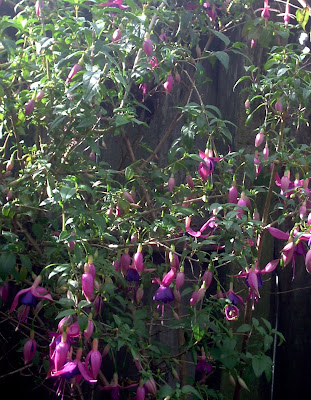 I know this isn't the greatest photo, and I know I have posted about Delta's Parade before. But gee, this guy is always in bloom! I have never seen this bush without flowers on it! And to think I didn't really like it when I first added him to my collection..... This is another photo I took this January.
Posted by PedricksCorner at 4:57 PM No comments: 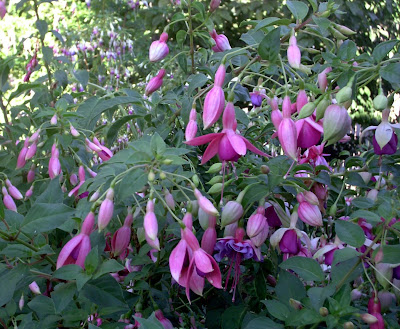 This photo of 'My Mum' was taken last fall and I may have already posted it. But it is doing so well and weathered the freezing temps we had here with flying colors, that I had to post it. It is growing next to an F. bolivian and an F. boliviana alba, both of which had to be covered during the worst freezes. And both of which had every leaf in contact with their blanket, burnt to a crisp. 'My Mum' helped hold that blanket up off of other areas of the boliviana's and didn't get a single singe!
Posted by PedricksCorner at 9:59 PM No comments: 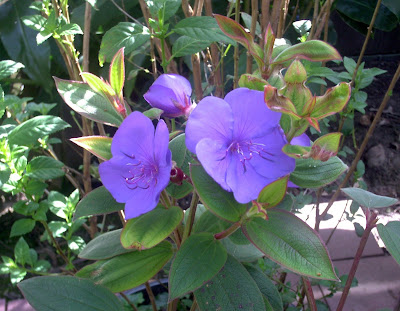 This is one of my goals. To grow these like I did back at Antonelli Brothers Begonia Gardens, by the hundreds. I finally have enough stock plants from cuttings I've done over the years, but this one is not so easy. The leaves are thick and furry and the stems are thick and fleshy. In other words, they tend to rot before they can root. I am determined though, as I do love these! This one here has been blooming most of the winter, even when it was damaged by the freezing temps we had a few weeks ago that even put snow on the hills nearby! You can see the freeze burn damage on the leaves next to those stunning flowers.
Posted by PedricksCorner at 11:12 AM No comments: 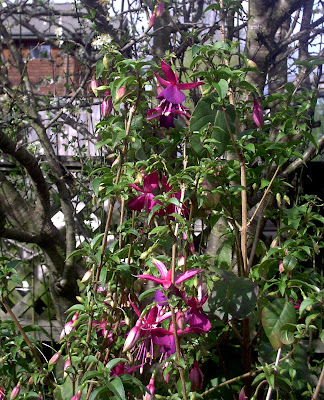 Delta's Groom is not far from Foxgrove Wood and as you can see, he is getting ready to bust out all over!
Posted by PedricksCorner at 11:34 AM No comments: 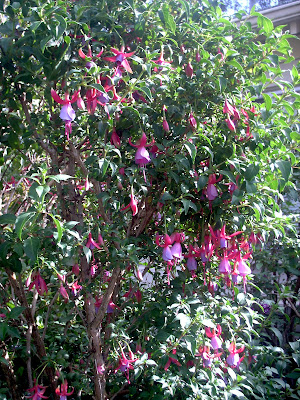 Foxgrove Wood is already covered in these little bluish and pink blossoms! This is one of those I keep in the front yard right along the pathway, as it is almost always in bloom.
Posted by PedricksCorner at 8:29 PM No comments:

Columbine is always an early bloomer! 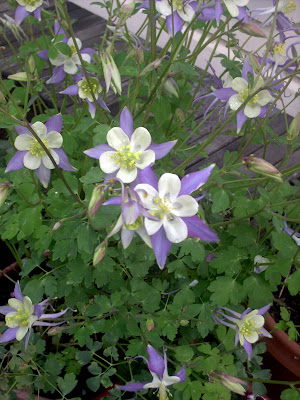 This is not the native columbine, it is a european variety. But it comes up every year and produces lots of seed. It always makes me happy to see it blooming.
A white version also blooms here, but it doesn't come up as soon and is so white, it is hard to photograph. I'll try again this year though!
Posted by PedricksCorner at 10:34 AM No comments:

Spring is busting out all over here! 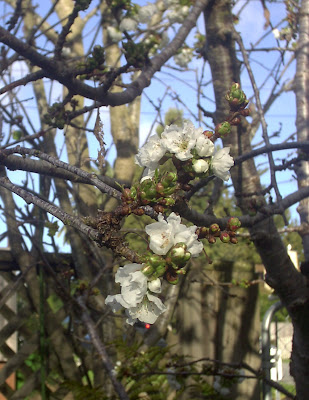 We had spell of freezing weather that put snow on the hills behind me and had me runnning up and down the hillside of the nursery, scrambling to gather plant material from each and every stock plant. All 219 varieties of fuchsias, as well as a few other plants. So at least some of each would be safe from freezing if it got that bad.
The good news is, all of it got turned into cuttings and now, over a week later, they all appear to be doing very well!

The other good news is, cherries LOVE freezing temps in the winter! I have two varieties, one is a Bing. I forget the name of the second one, but it is the necessary cross polinator. Most years, it doesn't start to bloom at the same time as the Bing. So many of the Bing blossoms go unpollinated.

This year, they are both in perfect step and are both busting out all over! If all goes well, I will be begging people to take gallon bags of cherries. This year, I'd like to get a cherry pitter and try drying some of them. And make some cherry jam! I've been working on a Celiac Recipe book up in SkyDrive. It is public and free to anyone with a Windows Live ID. Not much there now. It is definately a work in progress. The first entry was a Lemon pudding pie with a crust I concocted from dried fruits and nuts.
A second pie, yet to be added, had a dried cherry and dark chocolate crust with a fresh coconut pudding for the filling. So, you see, I am going to be needing dried cherries LOL!
Posted by PedricksCorner at 10:10 PM No comments: